Fight Skills 4 brings together the essence of Kenpo self-defense and Jiu Jitsu submissions. My goal in developing this course was to build your desire to take the underlying concepts here and use them to make your martial arts skill better, more efficient, and more effective.

Once you have developed the standup, takedowns and submissions the next step and the most important concept of the course is to put the moves together. I have 5 lessons (17-21) wherein I show you how to put the pieces together through what I refer to as “practical application”. Once you have done this you should have an understanding of how the process works.

This concept underlying this course can be done with a variety of standup, takedown or submission techniques. Thats the power of this course. You can take it and make it your own.

Of course, you can expand your knowledge by getting my other Fight Skills courses as well. 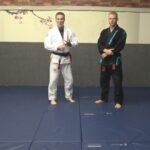 In keeping with my fight skills concepts, lessons 1-6 teach you skill set defenses which will be the starting point for the respective fight skill combinations in this course. Each technique will defend a different attack and/or angle.

Here, in lesson 1, you will learn how to defend the overhead attack with the skill set technique “Cocking the Bow” 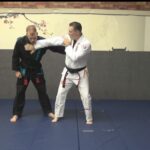 Eagles Grasp starts with a slight step in front of your attacker. This slides the shoulder being grabbed slightly forward which opens up the space you need to chop your attackers throat. Additionally, this slight step forward sets the angle for the “spreading wings” lock. Angle is everything in applying an effective lock. This is where knowledge of Jiu Jitsu fundamentals adds to your martial arts skill. The spreading wings lock of Kenpo, sometimes referred to as an “over-hook” in Jiu Jitsu, when done properly, totally changes your attackers body position. Fundamentally this sets up additional strikes, the rear drop sweep, the hip toss or move to the clinch.

You will learn more about using the clinch and hip toss as you progress through the takedown section of this course. 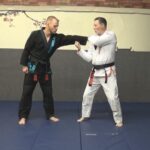 Releasing the Eagle starts with a step away from the grab thus setting up nerve strikes and the “pinch twist”. After you step away straightening the attackers arm applying the pinch twist causes such discomfort in the attacker’s wrist, they release their grab and tend to push their shoulder forward. The “key” strike knuckle position is perfect for striking the attackers radial nerve along the underside of the elbow and to the inside of the arm-pit. This combined action, pinch twist and key strikes, allows you to clear the attackers grabbing arm with a “spreading wings” release. Now, once again, you will find yourself in a strong position to take down your attacker. In this video I demonstrate use of the hip toss however, depending on how the attacker reacts you may need to use the leg hook or body fold takedown. I bring this up to emphasize the adaptability of my fight skills material.

Defending against a kick from the kneeling position. Skill set technique “Sacred Chopsticks”. 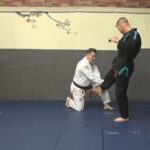 Further turning your attacker away from you allows you to attack their back and take them down from behind.

Defending against an attacker who grabs and suddenly pulls you into them. This would most commonly be a scenario where an aggressive individual is attempting to threaten you by getting up in your face. Skill Set technique “Burning Cinders”.

Go with the grab – don’t pull back, step toward your attacker to kelp keep your balance and counter strike immediately. Additionally, as your attacker pulls you your key strike target is the attackers solar plex’s. Immediately grab the back of your attacker’s neck with one hand and elbow strike with the opposite elbow. This combination will make perfect sense as soon as you watch the video. The concept here is your attacker won’t be expecting your swift counter-attack 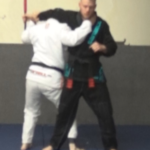 This technique starts with you blocking-grabbing your attackers overhead attack. Your attacker is creating the opening for you to kickout their balance and set up the rear bow sweep takedown by choosing to attack from over the top. This counter-attack combination is much simpler than you might think. The takedown is very effective and even though you may not use it that often when you do it is effective.

You must control your attacker’s wrist as soon as you grab it, this is the single most important piece of this technique. Controlling the attacker’s wrist allows you to place that same side arm behind your head thus using your shoulders as a fulcrum assisting in lifting and establishing the proper posture to break the attackers balance making it easier to take the attacker down. As you will see in the video, grabbing the attackers throat assists the takedown but more importantly physiologically defeats yourattacker mentally. Grabbing the throat lets the attacker know you have the advantage. 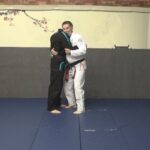 In this lesson I am going to show you four high percentage takedowns. It is worth noting each takedown offers you an advantaged position once you take the attacker to the ground. 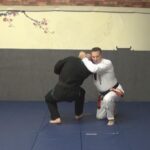 I am including this takedown in this course simply because I really like it. Use of the arm triangle is an efficient position standing, as a takedown and potential submission on the ground. The arm triangle used in this manner as you will see in the video really is a strong triple threat response. I would add that even if the arm triangle “choke” isn’t working properly holding the position and forcing the attacker to hold up your weight in the standing position will tire your attacker. Thus, once you do take them to the ground, them already be tired will aide you in controlling the situation.

The “mount” position is generally considered to be the dominant position on the ground. Typically, when you have top position, you can strike the person on the bottom while they don’t have the reach to strike back. In this lesson I am going to show you how to use three efficient jiu jitsu submissions 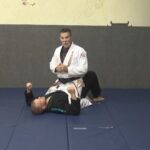 from the mount. I prefer to strike from top mount as striking is my preferred method of defense however the purpose of this course to broaden your fight skills abilities. As the focus of this lesson focuses on jiu jitsu here are three high percentage mount submissions. High percentage means they are more efficient than many other submissions. Remember there are lots of techniques in jiu jitsu, I encourage you to learn and use the high percentage fundamentals which are most effective and efficient. 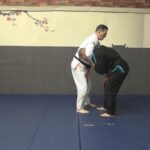 Here in lesson 10 you will start by applying the guillotine and then move to the kimura if your opponent tries to counter your guillotine. Then how to flow to the cross-collar choke if your attacker pulls away. Flowing to the cross-collar choke is particularly useful if the opponent pulls their head out of the guillotine. Once you are comfortable with these submissions develop a flow practicing moving from one to another. Being able to flow from one submission to another develops the triple threat response and makes your jiu jitsu ability more dynamic. 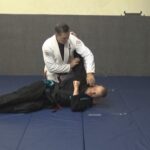 This lesson focuses on use of the arm-bar with you controlling from the attacker/opponent’s side. As I mentioned in lesson 7 it’s important to know, use and control where your choice of takedown “positions” your attacker. Knowing what position, their back, side or stomach, your opponent will be in after the takedown allows you to be one step, if not more, ahead of your opponent’s reactions. This is a sign of being a more skilled jiu jitsu practitioner but more importantly intuitively aware of fundamentals use. In this lesson I teach you to work the opponent with them on their side. Because you should already have control of the opponent’s arm after the takedown the arm is vulnerable to the arm-bar. You will see me explain this right in the beginning of this lesson. Be careful as you learn these arm-bars as your training partner is very limited in the capability to protect their arm. 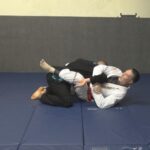 Attacking from the guard puts your opponent on the defensive. Remember the “mount position” is considered to be the more dominant position in jiu jitsu. That means the person on top psychologically feels superior. Your attacking from the bottom of mount in and of itself can cause the attacker to lose confidence or at least be caught off guard. If your attacker/opponent is focused on stopping your attack’s they aren’t focused on attacking you. In this triple threat response, the cross-collar choke is a good way to start being aggressive from the guard. Think about the strategy here, you are attacking, choking and to some degree controlling the situation. If successful you choke out the opponent. If not, you have setup the opportunity for the arm-bar from guard. You can move into and out of the arm-bar depending on the opponent’s reactions. If during this sequence of attacks your opponent puts their hand on the ground/floor they have just placed their arm in a position for the kimura attack. If the kimura fails or your opponent thwarts the attempt, you can move to the guillotine. If the opponent pulls their head out of the guillotine you return back to the cross-collar choke which is where I started this triple threat response lesson.

Lesson 13. Defending the overhead attack. Block and counter the overhead blow, take your opponent to the ground, achieve the guard position and finish with the cross-collar choke.

Defending the side shoulder grab. Strike the attackers throat and then execute a whizzer elbow lock. Move into position and establish a guillotine, when the attacker struggles – guillotine pull guard. Finish your attacker with the guillotine from the guard position.

15. Practical Application, Releasing the Eagle to Hip Toss to Arm-bar

Defending an attacker who grabs you by the lapel and pulls you toward them.

What makes this technique effective is to “key strike” the attacker in the solar plexus as they pull you in. Claw across the attacker’s face and then reverse the claw position to hold the back of the attacker’s head. Execute an elbow strike to the attacker’s jaw. Perform a double under hook and pull guard taking the attacker to the ground. Finish with arm-bar from the guard.

Defend against an attacker who tries to kick you when you are in the kneeling position.

Block the kick with a “X” block. Grip the attackers kicking foot heel and instep. Firmly reverse this position so as to turn the attacker’s leg over (this turns the attacker’s back to you). (The key to the “X” blocks effectiveness is to make sure the hand you grab the attackers heel with is on top of your other wrist when forming the “X”).

Stand up and immediately apply a “rear naked choke” to submit and finish the fight.

If you want to receive our latest news sent directly to your email, please use the form below to create a free membership. Subscription is free and you can cancel anytime.